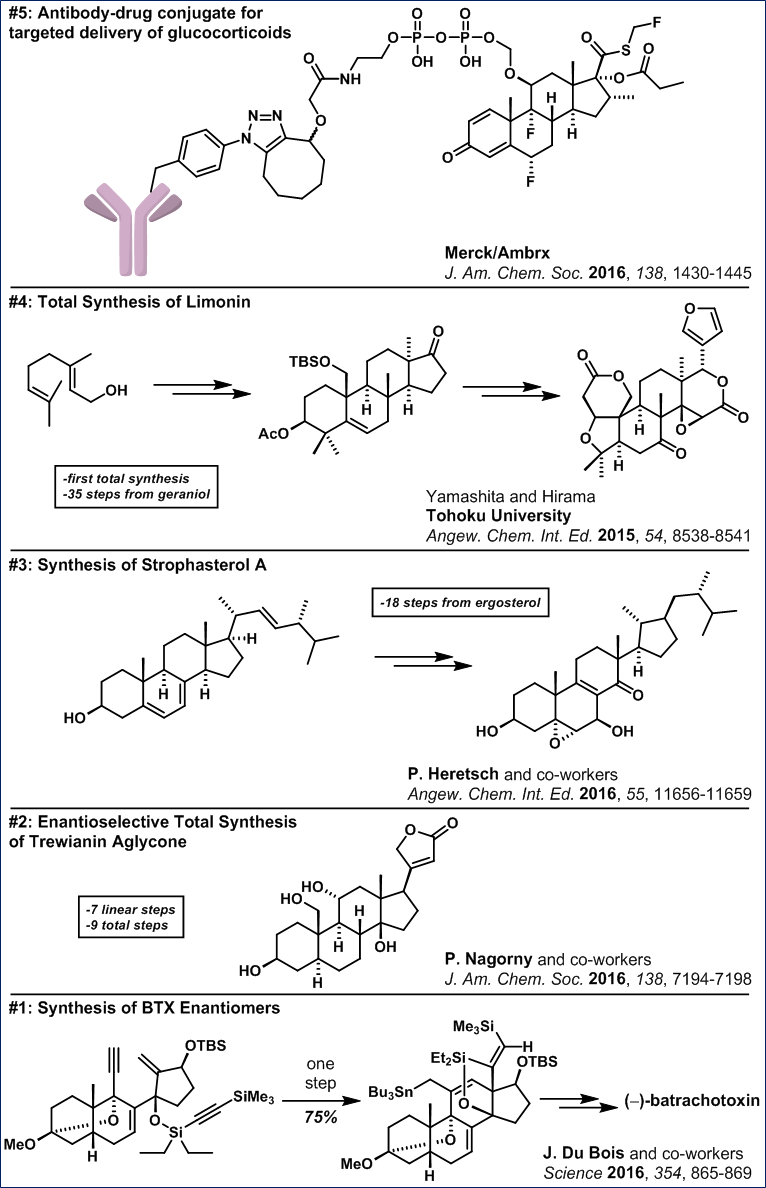 On the Existence of Human Pheromones

A fictionalized version of Hank Walter, the former chairman of International Flavors & Fragrances, Inc. (IFF), is portrayed by actor Josh Charles on Season 2 of the Showtime series Masters of Sex. IFF was (and continues to be) a massive global conglomerate that provided the chocolate flavor in Cocoa Puffs, as well as scents for the foremost perfume makers of the time. IFF and other private food and fragrance companies provided grant money to Masters and Johnson’s clinic to develop a pheromonal perfume and this collaboration served as a major plotline in Season 2 of the dramatic series. The fictional Walter character, ‘Dan Logan,’ conducts research on the show (See Figure above, left panel) aimed at marketing a natural aphrodisiac-infused scent to the general public. This led me to wonder: What is the deal with human pheromones? Have we actually identified smells (volatile molecules) that affect human behavior or is this junk pseudoscience propagated by the perfume industry? It turns out that the answer is: Yes, we have certainly identified olfactory signaling molecules that seem to influence our behavior. And the putative pheromone structures are steroids.
Pheromones were first described in 1959 as airborne chemosignal molecules that convey information and produce behavioral, neuroendocrine or developmental changes in members of the same species. Olfactory chemical communication is ubiquitous in the animal kingdom but, until recently, was not believed to extend to human behavior and social interaction. However, contemporary studies describing the gender-specific psychological and physiological effects of two human steroids contradict this notion. The two specific putative pheromones are androsta-4,16-dien-3-one and estratetraenol (structures displayed below), from the general steroid class referred to as 16-androstenes. These are steroidal molecules that lack an oxygen atom at C17, which is required for androgenic or estrogenic activity.
A 2014 study led by Wen Zhou at the Chinese Academy of Sciences (Beijing) aimed to determine whether or not the above-mentioned steroids communicate gender in a sex-specific manner. The authors showed that smelling androstadienone biases heterosexual females, but not males, toward perceiving images of walkers as more masculine. Moreover, exposure to estratetraenol odor was found to bias heterosexual males toward perceiving the walkers as more feminine. The results provide direct evidence that the two steroids communicate opposite gender information with the larger implication of the work being that human visual gender perception draws on chemosensory biological cues. Those chemosensory cues can be considered pheromones based on the definition that is referenced above. The intriguing results reported by Zhou and co-workers are consistent with previous findings that androstadienone increases cortisol levels and activates brain areas linked to social cognition. In addition to documented effects on human gender perception and physiology, there is also psychological evidence regarding androstadienone’s direct impact on male behavior. In a 2013 investigation conducted in Finland, androstadienone was found to increase cooperative behavior in decision-making tasks. Indeed, as a chemical signal of mate quality and dominance, the steroid elicited observable psychological effects on male subjects that seemed to place them in a socially subordinate position. Notably, this was the first study to show that androstadienone directly influences behavior in human males, acting in this instance as ‘the chemical equivalent of a peacock’s tail.’ 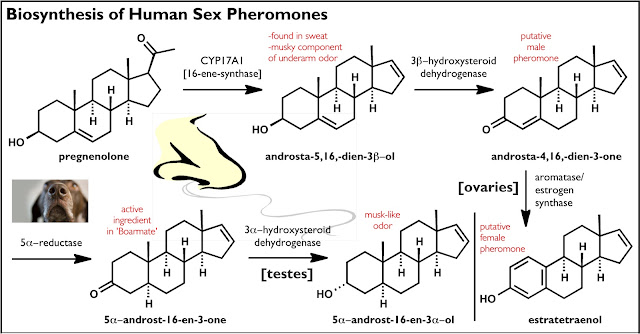 The 16-androstenes that have been identified in humans are biosynthesized from naturally occurring pregnenolone (see Scheme above). The biogenesis of the putative steroidal pheromones androstadienone and estratetraenol relies on the 16-ene-synthase activity of cytochrome P450 17A1 (CYP17A1), which excises the side chain subtituent from the enzymatic substrate and simultaneously installs the D16,17 double bond within the steroidal D-ring.
It’s interesting to compare the structure of 5a-androst-16-en-3-one to the odorous macrocyclic ketone, civetone. Civetone is a known pheromone derived from African civet musk that is used in perfumery. When drawn in a somewhat biased fashion, key features of the two-dimensional structure of civetone are cleanly superimposed over the corresponding groups found in the A and D-rings of androstenone. The structural features responsible for a given odor have been referred to as ‘olfactophores’ or ‘odotypes.’ Androstenone happens to be the active ingredient in a commercial product called BoarmateTM, which, as one might gather from its name, was developed to assist farmers with swine breeding. 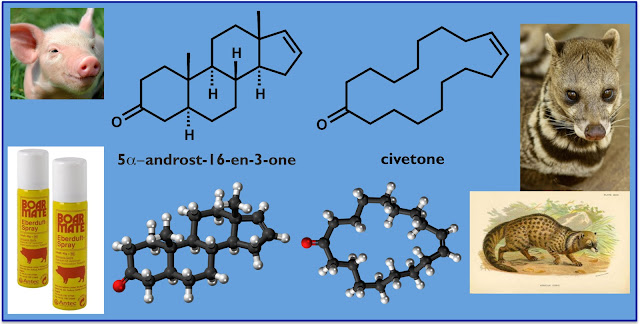 In vertebrates, odors are sensed by members of a family of seven-transmembrane G-protein-coupled receptors called odorant or olfactory receptors (ORs) that are localized on the terminal knobs of olfactory sensory neurons (see Diagram below). The human receptor OR7D4 responds specifically to 16-androstenes including androstadienone and androstenone. Upon odorant binding, the OR undergoes a conformational change that activates an olfactory-specific subtype of G-protein. This triggers a downstream signaling cascade that ultimately leads to the nerve cell signal. Interestingly, perceptual variation in the intensity and pleasantness of certain odors has been shown to be dependent on the OR7D4 gene variant that an individual carries. The OR7D4 genotype also predicts the sensory perception of meat containing androstenone, which is consistent with the idea that genetic variation in this important OR can alter food preferences. Whether one chooses to believe in the existence of human pheromones or not, steroids clearly serve an essential olfactory signaling function that impacts broadly ranging aspects of the human condition from gender perception to social behavior to dietary choices.

Partial Synthesis of Linckosides A and B, Unique C8-Hydroxylated Steroids from the Okinawan Blue Starfish 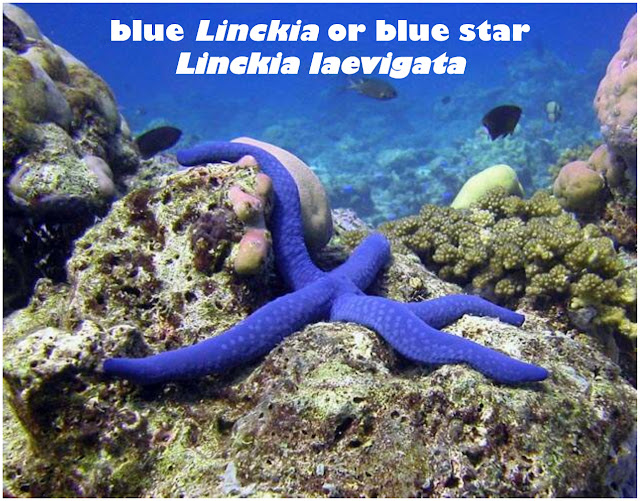 Linckia laevigata (also known as the Okinawan blue sea starfish) is a bright blue species of starfish that inhabits the tropical waters of the Indian and Pacific oceans. It has five cylindrical arms with a bright blue body color and yellow tube feet (See Image above). The distinctive color comes from a blue pigment called linckiacyanin as well as some accessory yellow carotenoids. The intense blue coloring of L. laevigata likely warns potential predators of toxicity, although there are no known adverse effects of the starfish on humans. Interestingly, these animals possess remarkable regenerative capabilities. For example, the blue seastar can use autotomy, or self-severance of a limb, to escape predation. Moreover, body parts lost to predators can also be regenerated by the starfish. Due to the aesthetic quality derived from their brilliant blue color, L. laevigata is popular with marine aquarium hobbyists for incorporation in personal reef aquariums, in spite of requiring slow acclimatization and being extremely sensitive to changes in temperature, oxygen level and pH.
In light of the regenerative capacities mentioned above, natural products obtained from L. laevigata were screened in the early 2000s for much sought-after neuritogenic pharmacological properties. Neuritogenic compounds or neurotrophic factors, exemplified by nerve growth factor (NGF), induce neuronal differentiation, wherein the neurons generate and extend neurites to form a functional network. For a previously reported example of a neuritogenic steroid, see. Neuritogenic activity is a vital component in the search for preventative and therapeutic agents for neurodegenerative diseases such as Alzheimer’s disease. Linckosides A and B, along with 20 minor congeners, were identified during the course of the screening campaign. Linckosides share a pentahydroxy-cholestane structural framework with variable glycosylation patterns. Polyhydroxylated steroid glycosides are commonly encountered as metabolites in starfishes. However, across bioactive and naturally occurring steroids, the hydroxylation pattern of the linckosides is relatively uncommon and hydroxyl groups located at the steroidal carbogenic position 8 (C8) are particularly rare. Very recently, Biao Yu’s group at the Shanghai Institute of Organic Chemistry completed the first semisynthetic preparation of linckosides A and B. In this post, we will outline their synthetic approach for oxidative functionalization of the steroid nucleus, paying particular attention to the strategy for introduction of the C8-hydroxyl group, an undertaking that is not well-precedented in the synthetic literature. 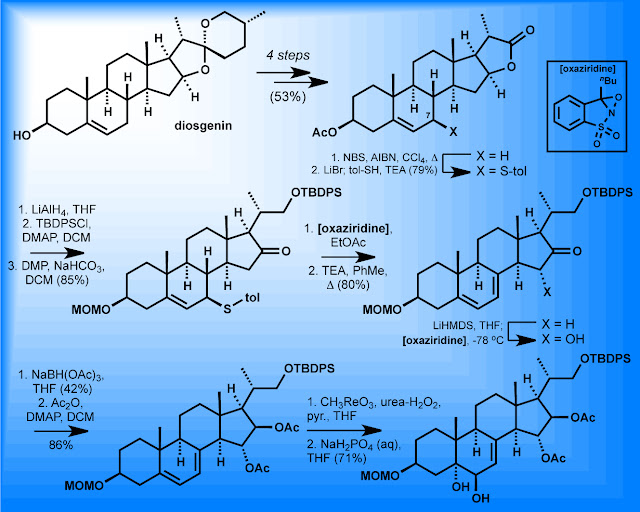 As depicted above, the partial synthesis of linckosides A and B begins from the well-known plant-derived sterol diosgenin, which was converted into the side-chain degradant vespertilin acetate by a high yielding four-step sequence that was conducted by Yu’s group on 33-gram scale. The steroidal C7 position was then modified under standard allylic bromination conditions to provide a functional handle that facilitated eventual access to the elusive C8 position. In brief, exposure of a C7 b-thioarylether intermediate to an oxaziridine reagent furnished the corresponding sulfoxide as an epimeric mixture. Subsequent treatment with a mild base at 80 oC promoted cis-elimination of the sulfoxide to yield a 5,7-diene. The D7,8 unit of unsaturation within the diene system is crucial to the overall strategy to ultimately hydroxylate the embedded C8 position. However, the more accessible D5,6 olefin was first selectively epoxidized using methyltrioxorhenium and urea-hydrogen peroxide and hydrolysis of the resultant oxirane generated the advanced 5a,6b-diol intermediate shown above. 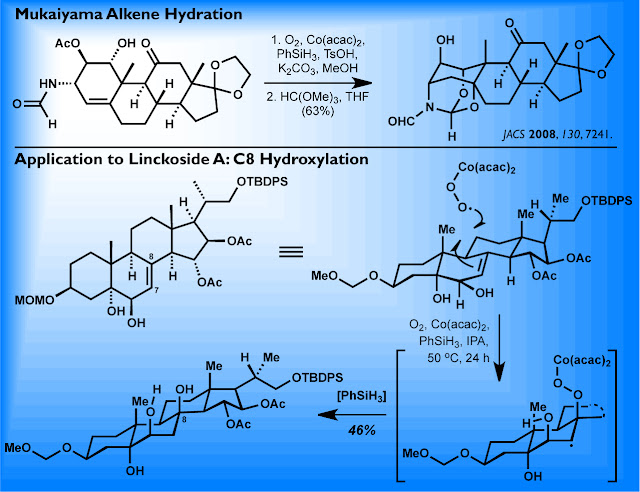 The Mukaiyama hydration reaction was used to install the C8-hydroxyl group onto the steroidal skeleton of the critical polyhydroxylated D7,8 olefin intermediate. A similarly impressive cobalt-catalyzed Mukaiyama hydration reaction was previously employed by Baran’s group for the stereocontrolled functionalization of a trisubstituted D4,5 double bond within a complex steroid system (See Scheme above, top panel). The formamido-diol product thus obtained was then condensed with trimethyl orthoformate, furnishing a protected intermediate that was suitable for eventual conversion into the natural product cortistatin A. In the current case of the linckoside synthetic campaign, Mukaiyama hydration of the aforementioned key substrate provided the desired C8 b-hydroxy product in a yield that can be considered acceptable in view of the novelty and exquisite stereoselectivity of the transformation. This critical reaction likely proceeds through the intermediacy of a cobalt(III)-peroxy intermediate as the active species, which adds to the least hindered p-face of the olefin with Markovnikov selectivity. The reaction was demonstrated on 330-milligram scale. 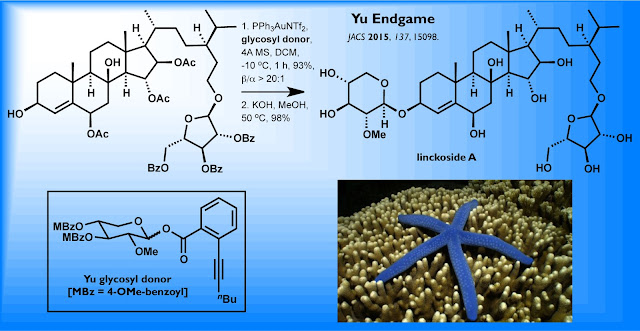 Yu’s group appended the final monosaccharide unit to the western C3-hydroxyl using an o-alkynylbenzoate building block as the glycosyl donor. This type of donor, which was developed in Biao Yu’s laboratory, is activated in the presence of a gold(I) cationic catalyst and, in this example, the 2-deoxy-b-glycosidic linkage was constructed with a high level of stereocontrol, even in the absence of a participatory C2-neighboring group within the glycosyl donor. A final global deprotection operation (methanolysis) effectively cleaved the acyl linkages of penultimate synthetic precursor to yield about 7 milligrams of the neuritogenic natural product linckoside A, for the first time in a laboratory setting. The chemical synthesis of linckosides A and B proceeds by a longest linear sequence 32 steps (44 total) and in 0.5% overall yield. The work is particularly notable as it provides a good blueprint for oxidative functionalization of the steroid C8 position in the context of a highly complex and biologically relevant synthetic target molecule.
Posted by BHH at 11:45 AM 41 comments: